Interested in doing a jigsaw for charity? Then order that jigsaw now via https://rotarywinschoten.247bestellen.nl or only € 20,00 incl. VAT (excl. € 6,00 postage) Orders of 10 jigsaws or more, are free of postage charge.

The Winschoten and Leer (OstFriesland) Rotaryclubs are collaborating in the ‘Jigsaw for a clean sea’ initiative. The successful debut of the Christmas-jigsaw developed last year by Rotary Winschoten (proceeds € 60.000) saw a popular demand for a sequel. ”Not just among jigsaw-enthusiasts in Holland, but also among our Eastern neighbours. Consequently, for this summer, together with Rotaryclub Leer, we now offer a new ‘EndPlasticSoup’-jigsaw in both Holland and Germany”, says Freerk Potze from Rotaryclub Winschoten.

“Germans enjoy their jigsaws and even more people have adopted the pastime since Covid19The Christmas-jigsaw-initiative by our Winschoten-colleagues impressed us to the extent that we also focused on it in our German Rotary Magazine, following which we received a lot of positive feedback from our readers. Also, the charitable cause of doing jigsaws for clean water, we find very appealing. As such we think it’s great to now collaborate in this initiative with Rotary Winschoten”, says Rainer Wilken of Rotaryclub Leer.

The Santa Run with its 50 Father-Christmas runners, and the Duckrace in the previous jigsaw were replaced by artist René Leisink of Studio Noodweer with activities related to the international Rotary Summercamps. Happy youngsters from different countries are enjoying themselves on and around the water. Potze: “That suits our objective. On a yearly basis, more than eight billion kilos of plastic waste ends up in our seas and oceans. The proceeds of our initiative will therefore again be awarded to the ANBI foundation ‘EndPlasticSoup’ for the development of projects aimed at preventing plastic waste-dump in the sea. This approach is also in alignment with the international Rotary theme worldwide: Protecting the Environment.”

In addition to many orders from Holland and Germany, orders for the Christmas-jigsaw were received from, among others, Australia, America, Spain, Switzerland and Turkey. The ambition of both Rotaryclubs this time therefore is to also promote the jigsaw internationally. EndPlasticSoup co-founder Ger-Jan van Dommelen is keen to contribute in this effort. “Like the Rotary, our role has an international character. “Our ambition is a plastic-free world in 2050. That means no more plastic in our oceans, seas, and on our land. To this effect we apply three starting-point principles; your time to act is now, to, step by step, do this together.”

How do I order the End Plastic Soup-jigsaw?

The 1,000-piece jigsaw goes, like the Christmas-jigsaw, for € 20, excluding postage. Orders of 10 jigsaws or more, are free of postage charge. The jigsaw can be ordered via: https://rotarywinschoten.247bestellen.nl.

Golden Rotary-logo: In three jigsaw-boxes a golden Rotary-logo is included. The lucky recipient can contact us and receive € 500 to allocate to a charity of her/his choosing! 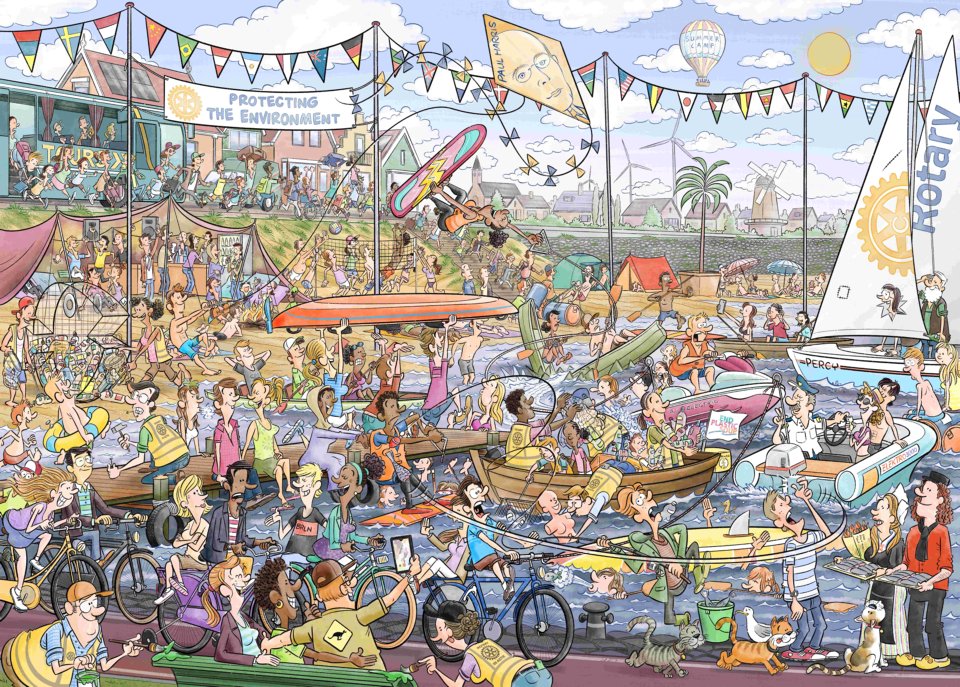